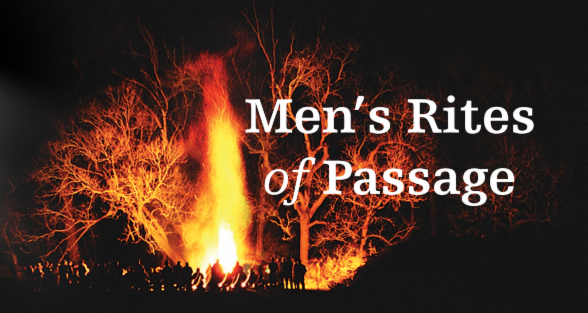 This article is taken from the Illuman Newsletter and features Terry Symens-Bucher, Illuman President.

The current sexual-abuse crisis and #MeToo movement indicate a massive failure of male initiation. Originally, male rites of passage were intended to prepare a boy to take his place as a man in his community without abusing power. The initiating community knew that an uninitiated man would abuse power, especially against those who were less powerful and more vulnerable. The lessons of initiation were intended to teach the boy how to wield power for the benefit of the entire community. Today, men’s initiatory rites and communities are being created by organizations such as Illuman to attain this same purpose. Illuman carries on the body of work created for male initiation by Fr. Richard Rohr.
While Illuman does not espouse a theology or doctrine, its rites embody a functional belief that there is something men need for their spiritual journey that women cannot give them. There is a spiritual gift that men need from other men to become healthy and whole, mature men. Though women may try to provide that gift, and men attempt to get it from them, this misguided effort leads to all sorts of mischief. At its worst and most insidious, the attempt leads to the abuse of power and sexual harassment. If this is true, as counterintuitive as it may seem, the problem of sexual harassment and abuse is more a problem between men than a problem between men and women. We men need to do our work, and our work, at some point, has to be with each other.
Is there a guarantee that an initiated man will not abuse power? Absolutely not. A man may go through Illuman’s MROP and remain essentially unchanged. The experience of the Rites can be like a seed that falls on rocky ground or among thorns. The awakening to one’s soul work may occur but not take root. On the other hand, sometimes a man leaves the Rites feeling unchanged or thinking to himself that nothing really happened. Then days, weeks, even months later he may slowly come to a realization, an awakening, that invites him to a new way of being in the world. He knows himself as a new man because other men see him as a different man. He sees something in their eyes that awakens a new self in him. I call this “the Gaze.”
The Gaze is the look a man can receive, when he is properly disposed, in which he sees himself reflected as a Beloved Son. While a Beloved Son may have much yet to learn, his fundamental relationship to power–both over himself and with others–will have changed. Such a man will no longer define himself as “not a woman” (or as a “wimp” or “wuss” or “nerd” or any other derogatory term usually understood as too feminine). Nor will he need to prove to other men that he is a real man by exercising male privilege and power over others. As the Rilke poem, “The Man Watching,” says, “winning does not tempt that man.”[1] He now grows in service to his own soul work and the world’s biggest vision-the edge where the world’s need and his gift meet. To paraphrase Bill Plotkin, that man is now busy digging as deeply as he can to offer his unique and authentic gift to the world as bravely and beautifully as he is able.
Here is a link to more info on the Men’s Rites of Passage.
[1] http://www.michaelppowers.com/wisdom/rilke.html.