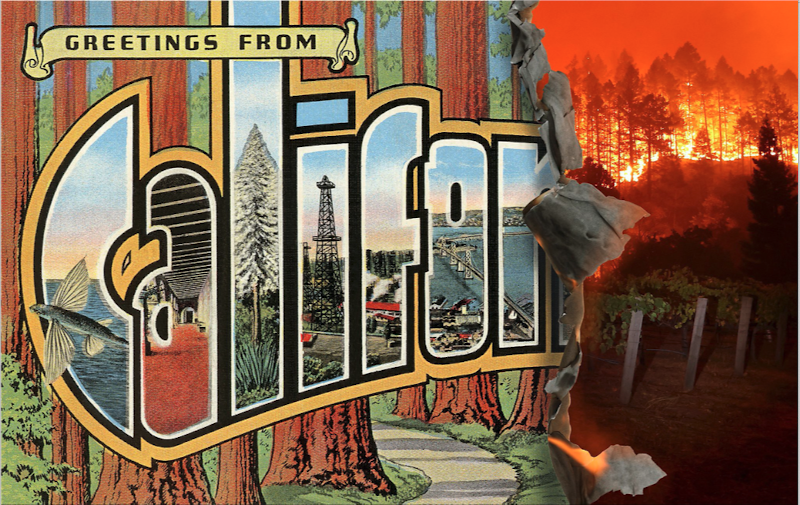 Rich and I started a letter mid-August but then came the fires and our evacuation and we have come home to a community that is deeply altered and in many cases traumatized. What was resonating in us over the last couple of months seems less important right now.

It took awhile for us to move out of the denial that once again fire was going to impact our  family for either a short-term or perhaps permanently. Going through the house and trying to decide what to take was fairly simple, after all we had lost most of it before. We headed for a friend in Walnut Creek the first night with the plan to go on to Chico to see Will and Britt and stay with our friend Gil Wesley.

For people who had rarely left the house during the extended Shelter-In-Place, being out, traveling and connecting with others proved more stressful than we would have expected. Even though we were with close friends and family, it was disorienting to be separated from our community with everyone in widely different places and it was oh so very strange to be eating out, even if it was all outdoors.

Many friends have reached out during this fire season to check in with us on how we were both doing, knowing that our previous experience with our own fire and Will and Britt’s 2 fires would make us more vulnerable. We were grateful for the concern expressed but, it has frankly taken some time to process what we actually were feeling both during the evacuation and then upon our grateful return home.

As Rich and I have talked, one thing stood out to pay attention to. After our house fire in 2009 we both experienced an overriding sense of peace, calm and trust in God’s future for us. We knew that this Peace came as a gift from God and not something we were able to draw from our own resources. In our evacuation, this Peace was missing. We both experienced a deep sense of fear which pursued us even into our dreams. When we explored this contrast we realized that the Peace of Christ which we had been given in our first fire, came in the midst of a real crisis. Our home was destroyed and we were homeless and displaced, that was real.  Everything that we feared during our evacuation was not real. It was a potential (and quite a  close call we realized after getting back), but it was not reality. What we feared was what might happen, not what did happen and Jesus can only be with us in the present, in what is real, not  in the future that we fear.

This realization brought to mind a conversation in the novel The Shack, by William Paul Young where the character that plays Jesus is talking with Mack. In this (abbreviated here)  conversation Jesus reminds Mack that:

“When I dwell with you, I do so in the present – Not the past, And for sure, I do not dwell in the  future you visualize or imagine. Mack, do you realize that your imagination of the future, which  is almost always dictated by fear of some kind, rarely, if ever, pictures me there with you?” It is  your desperate attempt to get some control over something you can’t. it is impossible for you to take power over the future because it isn’t even real, nor will it ever be real. You try to play God,  imagining the evil that you fear becoming reality, and then you try to make plans and contingencies to avoid what you fear.”

(Why do we do this?) “Because you don’t believe. You don’t know that we love you. The  person who lives by his fears will not find freedom in my love. I am not talking about rational  fears regarding legitimate dangers, but imagined fears, and especially the projection of those into the future. To the degree that those fears have a place in your life, you neither believe I am  good nor know deep in your heart that I love you. You sing about it, you talk about it, but you  don’t know it.”

If I am honest, I would have to say that fear is still pretty prevalent in our life right now. We are  just at the beginning of the fire season and our age puts us at increased risk if we get the virus.  But those are not our only fears. As we continue to face the uncertainty of the future, as a  nation in the midst of a pandemic, a contentious election season, a season of social unrest, a season of spiraling unemployment and economic uncertainty, how can we receive the peace of  Christ in the midst of our fears? We have found that staying rooted and consistent in the spiritual practices that keep us in the present moment with Christ have been helpful. Instead of  using our time to stoke our fears by remaining fixated on the news or social media, we are  consciously trying to find ways to serve others (even if it is online), pray often and focus on the words of Psalm 65, “In God alone is my soul at rest. God is the source of my hope. In God I  find shelter, my rock and my safety.”

Blessing to all of you in the midst of your own fears. May you know the Peace of Christ in your present circumstances.